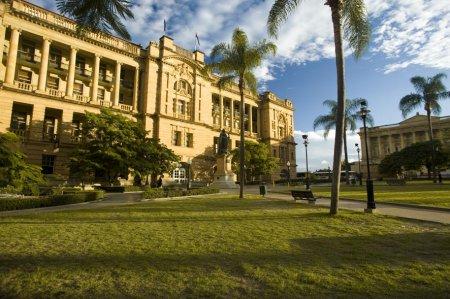 Location
Located in a grand heritage setting, right in the heart of Brisbane, the Conrad Treasury Hotel offers a world of first class entertainment. Situated at the top of the Queen Street Mall in the Brisbane city heart, the property is approximately 20 minutes drive from the domestic and international airports.

Rooms
With elegant guestrooms within the century old sandstone walls of Hotel Conrad, you will experience a standard of accommodation and a level of service second to none.

Restaurant
Whether you are celebrating something special or after a quick bite with friends, you will find the perfect place at Conrad Treasury. From five star, five hundred wine opulence to traditional bistro fare, the choice is all yours.

General
Conrad Treasury opens the doors to your meetings, seminars, and special events offering unsurpassed service excellence in a stylish and prestigious setting. Furthermore, Treasury Casino offers three exciting levels of gaming, with over 80 gaming tables and over 1300 gaming machines for you to experience and enjoy.