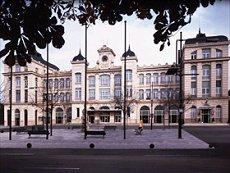 Catalonia Transit Lleida hotel preserves the classical spirit of the building and has been declared as the historical heritage of the site.

Location
Located very close to the Lleida railway station, Catalonia Transit Hotel is placed 5 minutes away from the historic centre and is just a kilometre from the city centre.

Rooms
The hotel features 51 spacious guestrooms that are gracefully decorated and come with an array of in room amenities.

Restaurant
The hotel offers a cafe, where you can relax with light snacks and sip on your favourite beverages.

General
Conference facilities are also available for your business needs. During leisure, you can explore the city and its surrounding attractions.